We are now two days north of Titusville, in St. Augustine, FL.  We have been here before, but the first time we were here we never left the boat.  However, the night we arrived I really wanted to go wander through town a little bit.  We are anchored right next to the Castillo de San Marcos, which is surrounded by an old tabby wall.  So I just had Kyle ferry me in and climbed up a very convenient set of steps in the wall and went and wandered.  We couldn't leave the dinghy tied there because a) there was no place to tie it and b) it would have been smashed up against the jagged tabby and...well, she's not looking so hot after a stint on the ICW and we don't want to push our luck. 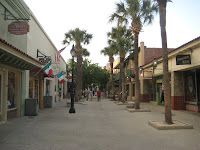 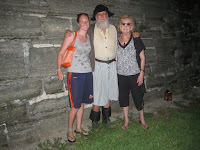 So I was meandering down the very touristy St. George street when I spotted a walking tour group.  I stopped with them to listen to what the guide had to say, planning on seeing what they were touring and then continuing on my merry way.  It was a tour of all the haunted building in St. Augustine.  Interesting if a little far-fetched.  Anyway, as they moved on to their next stop, I was about to continue in the other direction when one of the touring ladies grabbed my arm and said "Come along, dear."  Soon we were best buds, chatting about the boat and why I was alone, etc.  She kept telling me that "us redheads have to stick together!" and holding my arm.  She and her husband were on their way to NC from Orlando and were just passing through for the night.  They actually caused quite a scene within the tour group, which was impressive because her husband was a VERY quiet man.  I managed to escape when darkness fell, because Kyle had no idea where I was or what was taking so long, and also it is a little more precarious to hang out in a rowboat at night.  But before I left, I made sure to get a photo of Sue and our booming tour guide.  I might look a little frazzled, having spent ten hours in the sun. 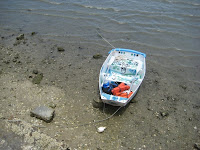 So after such a crazy evening I convinced Kyle that we ought to take a day to see the town, because it really is beautiful - lots of old ornate buildings - and it is full of crazy people.  This was kind of a problem because rowing to the marina to tie up the dinghy really wasn't feasible given the distance and current.  However, as previously mentioned, tying up at the fort presented it's own problems.  We ended up tying the dinghy painter to a small mooring anchor that was hanging out right next to the steps, and then leaving our anchor as far out as we could get it, thusly holding the boat in limbo between anchors, but able to be pulled to either anchor without upsetting the other.  As the tide dropped, it became easier to illustrate how we tied up. 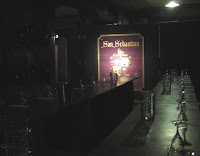 After an obligatory stop at the Sailors Exchange, we chanced upon a winery that we had picked up a brochure for at the tourist center.  We walked in an immediately were ushered into a conference room to view a short film with the rest of a tour group.  After that, a quick walk around the winery, and then on to wine tasting!  We learned how to sample wine, then tried out our new technique on five different wines, plus a sherry and a port.  And it was all free!  Amazing.  The wine was delicious.  You can see Kyle and I look like old pros at wine tasting. 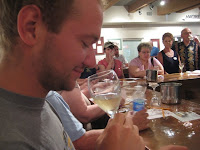 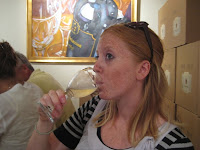 And as always, we walked around all day until my legs were numb and Kyle was walking like an old man, despite the heat and humidity.  When we finally stopped for food - our first restaurant meal in quite some time - we were famished and our burgers were heavenly.  See how happy Kyle is?  And after the burgers, we stopped at an Irish pub for a pint, and were pleasantly surprised to find a real Dublin native manning the bar. 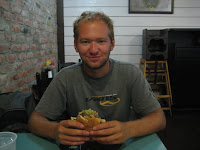 Oh, and I mentioned that St. Augustine is full of free wine.  Well, in addition to the winery (which can't be beat - they poured very large glasses of each "sample" wine), there are also a few winery stores along St. George St (the main tourist drag).  They each offer free wine tasting, so Kyle and I were able to also try some sparkling blueberry, Cocoa Beach (orange wine made with chocolate sauce), and Hot Sun (wine made from hot peppers and tomatoes).  We also met quite a few interesting people today.  The couple that witnessed us trying to free our dinghy at high tide were probably the most talkative ones, but if you saw someone suddenly dig into the water and pull up a rope that magically was attached to a small boat you'd probably be pretty curious too.

And because I take photos of everything, here are some favorite shots from today. 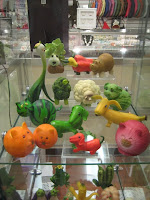 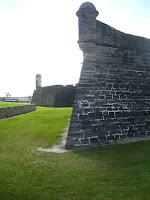 Kyle and I nearly had our dinner at the old mill, which was turning impressively (read: suspiciously) uniformly for how little water was flowing over it... 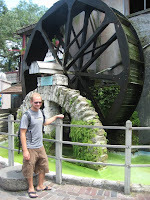 And of course, the lovely buildings - Flagler College and I'm not quite sure what the second one is. 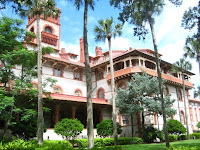 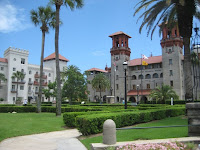 And, here is our spider buddy that was chillaxing in the sun as well as the WALL OF FIRE in one of about eight overpriced hot sauce stores that plague St. George St. 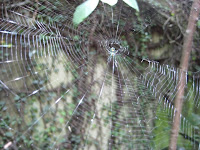 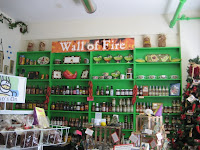 Email ThisBlogThis!Share to TwitterShare to FacebookShare to Pinterest
Labels: boat 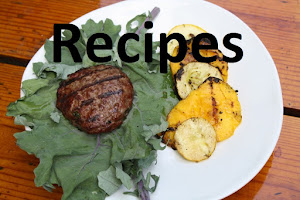 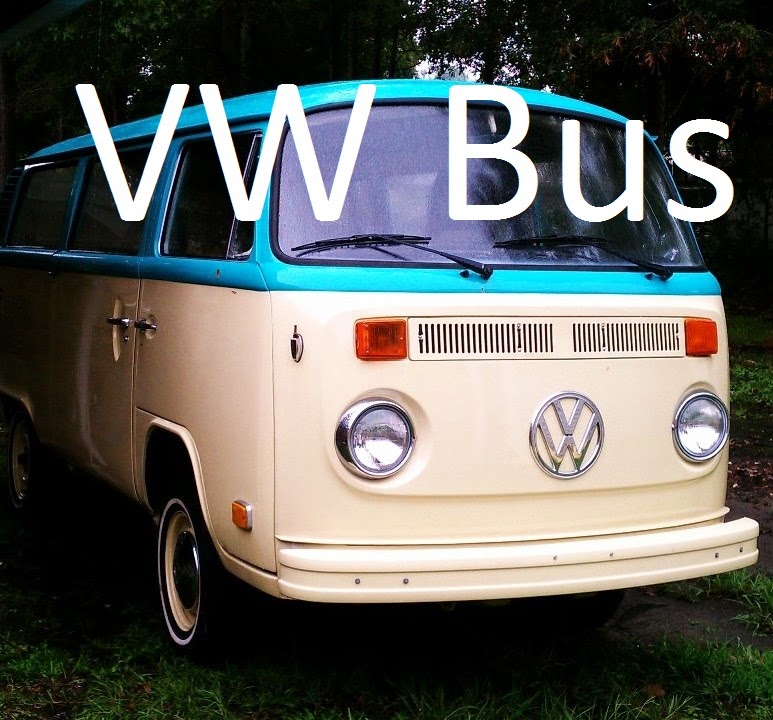 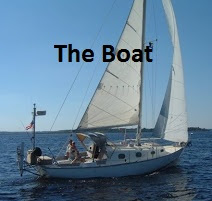 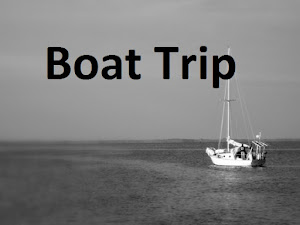 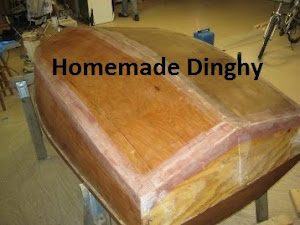